To Travel or not to Travel? 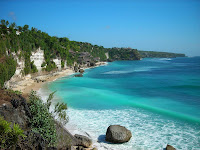 Why is it I've been spending the last few days daydreaming about going travelling? I don't also mean for a week holiday, I mean travelling abroad and experiencing the wonders of the world!
There could be a few reasons really, my stepbrother and his partner have just started on their Never Ending Voyage and Spurs boy's sister will be also leaving the UK later this year. In a conversation yesterday with Bestie she also admitted to me that since she had turned 25 she fancied going travelling. So what about me then?
I've never had the "want to travel" vibe, I've gone on holidays but that's been about it. A few of my friends took gap years before going to uni or college. I've never really thought about it until now, right now. Spurs boy and I have talked about travelling, but he has a six year old son who we would need to work out how that would work.
I guess the main thing that is important is that Spurs boy and I could do our jobs in whatever place we want to. For me it would be interesting to see football coaching in other countries and it would benefit my work as well as give me some life experiences of the world.
For now I'll keep daydreaming, but maybe 2010 could be the year I say Goodbye UK and Hello World! :-) Which reminds me I must get on with learning Spanish...

I'm thinking of leaving the UK this year. I'm doing an English language teaching course in Prague in April (I can't believe I'm going to miss the end of the league season and the general elections) and then I'm hoping to move to Rio! I'll see you there!

I'll be watching out for your adventures mate :-)

Life is what happens when you are busy doing other things. When you travel you realise just how much more there is out there! Open your wings and fly, Girl!

When the question is, "Travel?" the answer is ALWAYS "YES!!"

Traveling gives you perspective that you can't get in any other way. Go. Somewhere. Anywhere. You'll be glad you did.