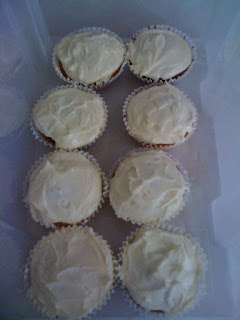 I made cupcakes this week when I should have been doing some study. Simple vanilla cupcakes with vanilla butter cream frosting. Heaven
I used to do a weekly blog called "The Good The Bad and The Ugly" when I used to go through my week and pull out the bits that fitted into each of those titles. I found I was focusing more on finding the bad and the ugly parts rather than concentrating on finding the good. I outgrew those blogs and people who read my blog commented that they liked those and that I should bring them back. So I am. Sort of.
It's called something completely different and it's more like the other "weekly link love" blogs you'll see on Fridays on other blogs but obviously mine have a Blissbubbley spin. I hope they will be enjoyable to read as they will be for me to write. So here goes;
- Football craziness took us literally around the UK and then to Milan in the past week. A bit tired still but we loved it all. Especially seeing three wins. Good Luck charms all round I say!
- I've nearly planned out the garden now and been able to venture out to our little plot and seen there is much moss growing everywhere. I think moss looks pretty but it's easy to get rid of too
- Rachel wrote about Professional Tweeting, with so many companies watching what you write on social networking sites. Do you think before you tweet?
- Thinking about getting a kindle? This review puts to test how good it is for travelling
- Feeling stressed? Maybe agony aunt yourself. I love this!
- Learning new things is good, especially when you've been married for a long time and you find out new things you never knew as Soapgirl found out this week
- I'm still learning Spanish. It's taking me ages but these tips have helped me re-focus just how I'm learning
- Mary Portas has been trying to improve the shopping experience in this country for customers and she's not the only one who is annoyed. Me included and it would seem a lot of us feel the same.
- I found out about Tapas in a Box. I'm hooked!
- I saw the film Paul at the cinema. Great film, laughed lots and thought the soundtrack was fab. Played this on the way home on LOUD and singing along. Heehee
Next week I have a big presentation to do for work which I've not yet planned or really thought about. Yes this is a priority! I also need to decide and organise myself into which day I'm going to for LFW (London Fashion Week) and somehow it's the school holidays again which means no tutoring but it does mean that Little man is off school again. Also the Cricket World Cup starts, and yes I have planned my working days around the England games. Sad? No. Obsessed? Yes.
So what have you been doing and what have you got planned for next week?

So I enjoyed writing that. Will definitely make this a weekly thing. Also the title Weekly Loves, it's a working progress title. It might change, but for now I like it :-)

Really enjoyed your links Sarah and thanks for including my post! Hope you have a lovely weekend :-)