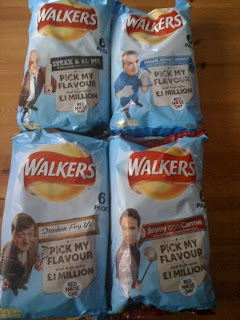 Crisps! I love crisps, so of course I jumped (carefully) at the offer to review these new ones from Walkers Crisps. These aren't just any old crisps either, 5p from each bag sold goes to Red Nose Day!
Four comedians have joined forces and they each have their own flavour;
Stephen Fry - Stephen Fry Up
Al Murray - Steak and Al Pie
Frank Skinner - Frank Roast Dinner
Jimmy Carr - Jimmy Con Carne
Whichever comedian/flavour sells the most WINS. The three losers will have to do a forfeit. The forfeit is that they will get a body wax from a mystery celebrity! All in the aid of charity. Anyway to the crisps...
First when I was sent my box of crisps I hid them in the top of my wardrobe as I was sure as soon as the others saw them they would be gone. Then over the weekend I set out 4 bowls and we got to tasting each flavour.
I loved them all. But if I really had to pick one...
It would be Jimmy Con Carne!

When I asked Little man which would be his favourite he picked up a packet of each flavour and sat with them on his lap and asked "Why?" - I think he had become worried that I would take them away from him!
I was pleasantly surprised that I liked all four flavours, normally I'd found one flavour to be very dull or not taste anything like it's supposed to. You should definitely try them, and with 5p going to Red Nose Day, how can you argue?
For more information see Walkers - Clash of the Comics
Thanks to Sam from Walkers Crisps on twitter for sending me these!

I'm off to the shops to go and buy more! I might have to hide them again though...