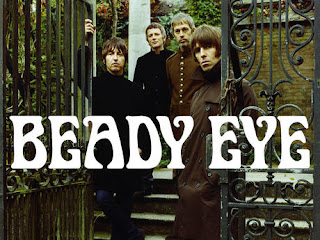 You remember that band Oasis right? The Gallagher brothers, the whole Blur v Oasis debate etc well I was a fan of Oasis and also Blur now you mention it. Then Oasis split. Finally. It was over. I wasn't upset, I think by the time it was all final I'd become a bit blah about whether they would release any more stuff so it wasn't a shock and then there came the announcement that Beady Eye would be Liam's new band.
Liam took the other former Oasis members and re-formed under Beady Eye but of course without Noel. I was a bit meh about the new band formation, I'd been very much more of a Noel fan than Liam. This wasn't because of Liam's somewhat arrogant behaviour I should add, I just generally liked Noel more.
I'd heard the few tracks that Beady Eye had released towards the end of 2010 but it was the release of "The Roller" that I took notice. What I had loved about Oasis back in the day (how old do I sound?) was the arrogance of what they did, sung about and how Liam had sung those words. It's the same things as to why I love Kasabian too, but in a lesser form.
So I guess I should apologise to Liam. Maybe you were my favourite.
I'm looking forward to the album!