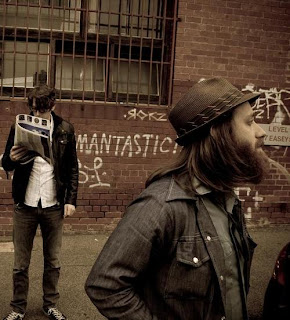 Mega big fan. Never seen them live before. Then they supported Kings of Leon last week at Hyde Park and I'm now an even bigger fan.
Of course they often get compared to The White Stripes (who I also love) for the blues based duo of drummer and vocals/guitar. The Black Keys consist of vocalist/guitarist Dan Auerbach and drummer/producer Patrick Carney. I eagerly awaited their latest album Brothers

and it didn't disappoint. I was hooked straight from the start. It could actually be my album of the year!
Opening track on the album. Turn it up!
For Hyde Park they played a one hour set and they have been many a review stating that they were the best at Glastonbury this year. One of the first things I did on the train home was find out if they were on tour again over here soon...they are! November. I'm going.

Also I have noted that the last few Sarah Loves... have been music biased. Next week's won't be. Maybe. :-)