Could I be a vegetarian? 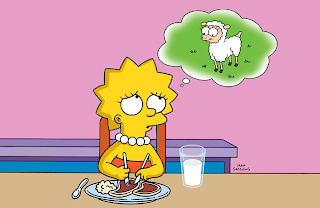 Now the title of this post will already have made some of my friends and family gasp at the thought of me becoming a vegetarian. I'll explain why.
Growing up I hated vegetables, they tasted like the worst things in the world and I would always be leaving them in the corners of my dinner plates. Sometimes I would put my napkin over them to try to hide them. Of course this is just childish fuss as all children have some type of food that they don't like. Half of the problem really came from the fact my Mum used to boil the life out of vegetables that when I did on the few occasions try them, I used to pull that "bleurgh" face and wish those disgusting things off from my plate. Then there were of course the times where I couldn't leave the table until my plate was clean, at the time I thought I had the meanest parents in the whole world for making me sit and finish. I had a mental block to what it was to taste vegetables and believed that they tasted exactly like the ones I was made to eat at home. I sound like such a fusspot don't I?
When I left home I got a bit adventurous and started to buy vegetables to go with my dinner and I realised "Oh they're not that bad" Stupid I know. I still suffer the same problem with vegetables when I visit my Mum as her style of cooking has not changed but now I add a bit of butter and pepper and I'm fine. She still always makes me a little bowl of sweetcorn, as growing up this was really the only vegetable I liked, but she always makes the point that "they are just for Sarah". Mothers!
In the past few months I have found a lovely vegetarian restaurant and now for meals out it has become our favourite choice of places to go eat. Our freezer is now stocked with soya mince and various quorn ranges too. Spurs boy only found out a week ago that he's been eating some quorn stuff!
Some friends of ours are vegetarian and we often have them round for dinner and vice versa and it does make me laugh to think back to how fussy I was as a child with vegetables. One of my favourite dishes is vegetable lasagne and there is always a batch waiting in the freezer. Nom nom nom!
I have even noticed that my food bill has gone down. Happy times. I still do eat meat though but definitely not as much as I have ever done so before. I haven't had any meat since last weekend's BBQ at a friend's house. That's nearly 8 days ago. Obviously there is the ethical question about eating meat, that I admit have made me look into how much meat I was eating and if I could in fact become a vegetarian.
I don't think I could ever be a full on vegetarian, but looking back to when I was younger to now...anything is possible ;-)

There's no need for you to impose rules on yourself around eating in this context. If you do have meat there's no need to feel guilty. Just let your taste evolve naturally. Being vegetarian has distinct advantages but it's a label of sorts. Do whatever feels best :)

Cheers Waq. I think I'm so far from my teengae years that it's good to have so much choice now of what to eat.