Sarah Loves... Cranium the Board Game 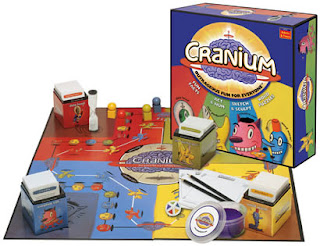 Now I love Monopoly but Cranium is way up there alongside and possibly could take over! Admittedly you need 4 or more people to play so it's only good with enough people. Recently we've tended to play it with a bigger group and had 3 people in a team when we've had a lot of friends over.
The board looks a bit like a Ludo board but when you land on the coloured tile you have to read the associated coloured card and do as it says.
Data Head (Red) - are your general knowledge questions
Word Worm (Yellow) - anagrams, spelling forwards and backwards, fill in the blanks
Creative Cat (Blue) - drawing blindfolded, sculpting with clay
Star Performer (Green) - acting, singing
Now DO NOT rely on me for the drawing blindfold or sculpting part, I've drawn on the table a few times and my baked beans on toast made out of clay apparently looked like one big mess! Oops!
I like the Word Worm and Star Performer sections but the Data Head questions make my brain hurt! This is why it's good to get a good team together to play, although half of the fun is when it all goes wrong. Normally in the Creative Cat sections...
It's really an adult based game as some of the questions are really difficult and some of the Star Performer questions are of people that children don't know, although my god-daughter came in handy as a team sub for a Britney Spears song! ;-)
There are lots of additions and different games now in the Cranium Series

We've recently bought Cranium Cadoo as it's perfect for Little man and it's about my level too :-)
Have you ever played Cranium?