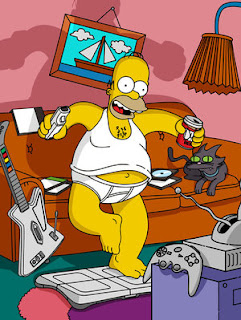 I remember the day I was given a Nintendo Wii for my birthday. The package was wrapped as it was in its box, no pretend packaging to try to hide what it was. I'd been a manager in a Video Games department for a while and I "knew" that box. I was like a kid at Christmas!
At the time the Wii Fit was really hard to come by but I spotted "the box shape" amongst my presents. Again I was like a kid at Christmas :-)

I just started with the Wii Fit, Wii Sports and Mario Kart (It seemed everyone was waiting to play this one!) and as I'm a bit of a games geek it wasn't long before I was adding to my collection.
My Favourites are;
I've just pre-ordered Lego Pirates of the Caribbean :-) I'm also tempted to pre-order Zumba Fitness after enjoying a few Zumba classes.
Spurs boy is pretty happy with his PS3 and Little man with his Nintendo DS but sometimes we will all be around the Wii playing either Just Dance or Mario Kart. Fun family time. Plus it's always good to have snacks around too :-)
The best workout I find except Just Dance; as it's so addictive you forget you've been playing over an hour is Wii Boxing. Ouch my arms!
Have you got a Wii? Or are you a Xbox or PS3 fan?