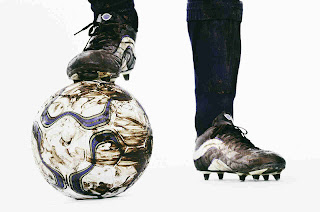 Now you all know I love my football, and I'm pretty knowledgeable on the area. I'm a passionate football fan who enjoys banter with rival fans, and have pretty colourful language when watching Manchester United play at times ;-)
You may remember that Spurs boy decided to come out of his Sunday League football retirement and start playing again. It's not been particularly easy for him, first of all up until Christmas last year he used to smoke 30 cigarettes a day. He heavily cut back as his 2010 New Year's resolution after nearly twenty years of smoking and since June he won't smoke at all. The sudden impact of cutting back on the smoking and the fitness regime he went through was pretty tough going and at times I wondered if he would just give up. But he never did.
If he's determined to do something then he will do it. He's even managed an arrangement that if Spurs kick off early on the Sunday then he has the match off. Very crafty! Although he's very honest that he doesn't expect to play every week. They have played three matches so far (one of which was yesterday which we were away for) and the other two he was a playing substitute. He's scored two goals in those two games too. He's pretty pleased with himself although absolutely shattered after.
Now me in my role as a WAG *coughs* well it's not exactly like how I thought it would be really. So far;
It's good fun though despite all the above, and Spurs boy is really enjoying it. That's the main thing, and of course me and Little man are terribly proud!

That sounds like good fun. I haven't been to a Sunday League game in years, since my brother stopped playing.