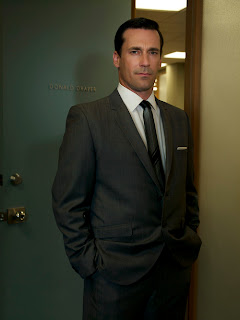 Ever since I first started watching Mad Men I was ultimately always going to fall in love with Don Draper. I mean seriously, who wouldn't?
I have read several blogs about Don Draper and how much they love him, these blogs are written by both men and women. This is all very odd as Don Draper is a fictional character on a TV show, he is not real. But yet he was named the most influential man by Ask Men in 2009 ahead of Barack Obama and Usain Bolt.
There is a lot to "Don Draper" in his past and it's clear that he is no saint. He is a brilliant career man but also a temptation-swayed philanderer who sincerely wants to be a family man. His flaws are there for us to see and yet we all feel completely drawn to him.
Spurs boy shares the same love for him, and like me can obviously point out how well written Mad Men is and of course how well John Hamm has played Don Draper.
Also no one wears a suit like Don Draper does ;-) 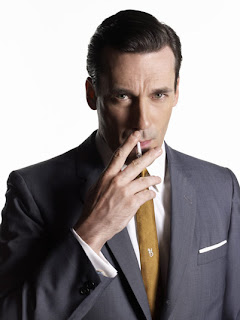 If you haven't been watching Mad Men. Then you should. You really, really should.