Sarah Loves... going to the Cinema 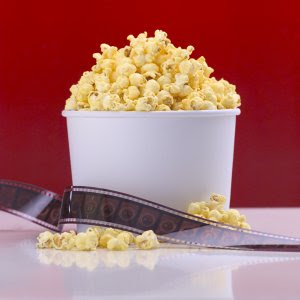 I always at this time of year go to the cinema at least once a week and always pledge to go more during the rest of the year. This time it will be different. Oh wait, I say that every year too.
I absolutely love going to the cinema. The excitement of waiting to be able to book tickets to actually having the tickets in your hand, the buying of highly expensive treats from the cinema shop (I'll explain this in further detail later on), then you show your tickets and you're in. You get all comfy in your seat with your food surrounding you and of course you make sure your phone is switched off!
I always get annoyed to miss trailers so I always have to be seated before they start. If I'm late at booking tickets and it means I'll be late going in, I'll book for a later time or day.
Depending on who I'm with and what film we watch depends on what food I eat. Yes I know this is a lot for you to take in as it's just a trip to the cinema, but this is my blog so shhhh!
So anyway for trips to the cinema with Bestie, which tend to be more of your girlie type films we always have ice cream with the works, you know chocolate sauce, nuts etc. Nom nom nom! For trips to the cinema with my brother then it's always chocolate, Minstrels is the all time favourite. With Spurs boy and Little man then it's popcorn, but it depends on the film - I'll explain. Most kids films are pretty action packed so popcorn rustling is not so bad and most films that I go to with Spurs boy have a lot of action in so again that's ok. But I would think again for instance when we saw Marley & Me I think we may have had a slight "disagreement" over whether I would "allow" him to eat noisy popcorn through a quiet film. I won, and we had minstrels :-)
My other dilemma where cinema food comes in is the cost. I admit there aren't many ways to get around bringing your own ice cream into the cinema, except for bringing in a freezer maybe (lol). But the ice cream is either Häagen-Dazs or Ben & Jerry's at the cinema. Nom!
Minstrels or other chocolate goodies are bought in trip to local shop before cinema visit.
Now popcorn. Ok let me take you back to my childhood. My brother never has liked popcorn so I had that usual problem growing up that because he didn't like it I had to always have something that we could share, so it was always chocolate. At home we'd get that microwave popcorn and I seem to remember my Dad having toffee popcorn at home sometimes and I liked that. When I started going to the cinema with friends I was always buying popcorn and it was my favourite thing to eat. Then later on I got a job at a cinema...
I hated popcorn. Cleaning up other people's spilt popcorn made me hate the stuff and also I found out how much a cinema pays for popcorn and frankly "kerching" to the cinema.
So anyway there's my little relationship with popcorn for you. But I like it again now, and I think Spurs boy is pleased he won me back round about it although excusing the price it is my favourite cinema snack. Just don't tell him!
Back to films, the first film I saw at the cinema was a rerun showing of Disney's The Fox and the Hound
Aww so cute.
The films that I have much love for are the Harry Potter series and the Lord of the Rings trilogy. Both of these started when I worked at the cinema and it was one of the busiest times I've ever known in any job and I think seeing how everyone else was excited to see the films had made it even more exciting for me.
I even went to the LOTR trilogy showing in London where you could watch the films one after the other :-)
Apart from the Harry Potter series coming to an end the film I am most eager to see is this one, my favourite book from the Chronicles of Narnia :-)
It would be wrong of me to end this blog about cinema without mentioning my favourite cinema character.
Yoda.
I often use yoda quotes in my day to day life. Yup I'm a total geek.
What is your favourite cinema snack?
What is your favourite film?
What upcoming film are you most excited to see?

I love the cinema too!
Mostly we have popcorn and sometimes ice-cream. Recently watched Twilight Eclipse and Toy Story 3 which were both fab and tomorrow me, hubby and the kids are off to watch the new Tinkerbell film :)

I'm off to the cinema tonight to see Inception, for the third time. Great film.