I love being a bridesmaid for Future Bride and we've not actually reached their Wedding day yet :-) In recent weeks I've shopped, tasted food, prepared seating plans and marvelled at the prices some weddings could cost.
I have loved each and every part of it. The main thing has been how much Future Bride has said I've helped her, after all that is the point isn't it?
Just last week it was her youngest son's birthday and as money is a little tight it was all hands on deck to make sure he had the best birthday ever (well until next year!). Earlier this week Future Bride heard that her Dad had to go back into hospital for further cancer treatment, he had seemed so well when I had seen him at the birthday party.
We had planned for the hen and stag do's to be in Scotland but due to her Dad being back in hospital we have booked somewhere local. The boys do is a golfing weekend and we are having a spa weekend :-) I had mentioned on twitter that I was in need of some spa time. Of course I wish it could have been in happier times.
Gotta mention that the chosen food for the reception is... fish and chips. I love it. 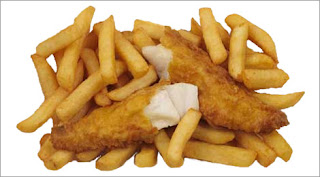 Its still not letting me sign in (its yolkiesgirl) Just wanted to say that at first, when we was given suggested menus I was a bit wary about having fish and chips at our wedding- but then again, our wedding isnt going to be a normal sit down 4 course meal.

I wondered what people would think about having this on the menu.. was it too common? Well, I can tell you that the response was HUGE! People thought it was a great idea and they are looking forward to nice proper food (we have got other foods on the menu like chef grilled steak and chicken to order) but it was really nice to know that guests will love the choice!

Im pretty sure we will be the first people to serve fish & chips to their guests at a Walt Disney World wedding... I have never heard of it before but as long as everyone is happy!

A few people have been surprised to hear about the fish and chip dinner at the wedding but most have loved it. As long as my friend's have a lovely wedding then that's all that matters. x