It's just a phonecall... 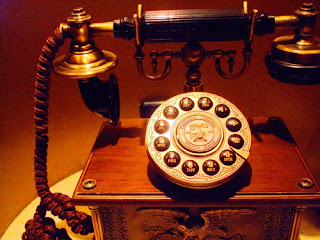 Image from HERE. This is not my actual phone, I just liked the picture!
I can natter away at the best of times and yet there was one phonecall that was making me really nervous, like butterflies in my stomach nervous. I'd not felt this way since having to ring up boys for dates in my teens. This was bordering on stupid for this 30 year old. This wasn't a boyfriend this was a friend who I really cared about yet have never met or even spoken to.

Yes this was a twitter friend. I've found an almost instant relationship with some likeminded people on the site and she was one who after one thing or another we got into being penpals. It became an extension to our twitter chatter. Then over time we got to talking nitty gritty and without actually seeing someone I felt I "knew" her. Fabulous!
Later this year I will be doing the actual meet face to face and I'm so excited. Then on twitter another like-minded twitter pal suggested skype and it was like a sudden "Why didn't we think of that?", Then I'd said one day I'm just going to phone you! So yesterday I hung about on twitter in the afternoon and waited to see if she popped up on twitter (I could have texted but she works nights and sleeps during the day so I don't want to be annoying her already!) and she did. With a simple tweet and then I rung her.
From the first second to the last minute (we spoke for over 1hr and 30 mins!!!) there were no awkward silences, it was pure chitter chatter. Much like how I'd imagined, we had a good gossip, laughed, talked about family, work... It was just like talking to a friend that I've known for years and years. It was just super! Skype will be next though and it's so exciting as I've never made friendships this way around. I've always seen their faces before and this way it's like putting all the pieces of a jigsaw together.
I think the nerves as we'd discussed in our chat were mainly a little fear of rejection. You can know so much about someone and not yet "know" them, "will they like me" so it's just like making that call and asking a boy for a date! No one seems surprised that we chatted for so long and how excited we were after. We both have a love for accents and on twitter I think everyone reads tweets in their own accent. I found it really hard not to start picking up her accent, I was making a real effort not to copy it!
Anyways twitter friends are just awesome. This year I will be meeting up with lots and it's totally fabulous. With all the downsides to twitter there are some upsides to it too. Right now the upsides outway the downsides!

I think that is lovely that you have made new friends via the internet. It is amazing isnt it? :-)

It is. I think it's amazing how close you can feel to people you've never "met" yet. I love it :-)

Sarah! I'd love to meet up with and Spurs Boy at some point! You guys sound so cool. Let's get Steve involved too! It'd be the funniest thing ever!