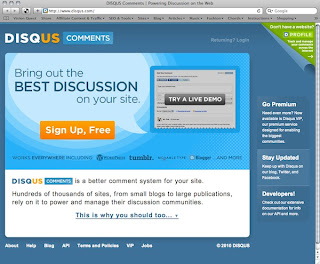 I'd been meaning to add DISQUS to this blog for ages. Spurs boy has decided that he would like to join the blogging world and I said he should add it to his site straight from the beginning. I've added DISQUS on here now too the reason I had not done so sooner was because I had heard you lose all your old comments.
I was too scared to try it before and so carried on with the usual blogger style comments but after Spurs boy installed DISQUS to his site I thought I'd take the risk. I felt bad as people had spent time commenting on this blog and I didn't want to lose the comments that they had left. I installed DISQUS and watched as my comments disappeared from my blog, I could still see them through the admin section but I wanted to cry.
I then had a bit of a surf around on DISQUS and under the tools section I found a "import" section and now all my old comments are on the site too. Panic over. I could have changed over ages ago, ah well it's done now :-)

Woohoo!! When I visited last night I went to see if you'd commented after one of my comments and they were gone so I automatically thought Disqus was to blame but I'm glad they're fixed now :D

Disqus is so easy!

Yeah I have got all the old comments but disqus is just much easier! :-)