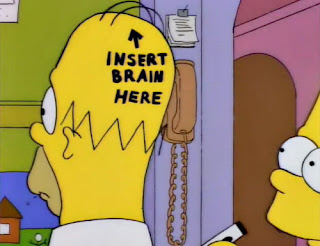 Image from HERE
I received a lovely parcel of "silliness" as we are calling it from Soapgirl Thoughts and inside were a lot of fun things puzzle books, pom pom craft kits, sweeties and much more. So sitting down with Little man (he's 7 years old) with one of the puzzle books we did a spot the difference puzzle, and then another and so on. There began to be a familiar theme. He was always winning and I wasn't letting him.
After much stick (Ha get it stick and I'm on crutches! LOL ... laughing on my own again am I?) from Spurs boy I decided I would get my Nintendo DS out and charge it up and show him that I wasn't to be defeated with a go on Brain Training. So I waited for my DS to charge and decided to ignore the snidey comments and waited to prove him wrong. Then my DS was charged and I was off and the result...
My brain age was 44...
Oops! Then Spurs boy had a go....
His brain age was 29... <<*coughs*
You know sometimes you just want to be proved right and then you're just so wrong. This was one of them. Still I suppose it gets me back from being a Duvet Stealer!
Anyone else play brain training?
What's your brain age?