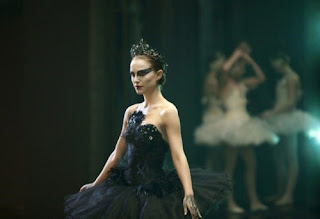 Image from HERE
I've wanted to see the film Black Swan for some time and I've noticed already that it's getting a lot of publicity and especially amongst the fashion magazines. I'm not much of a fashion magazine reader but I admit I do dabble every now and then. I've noticed a ballerina esque style to some designs. I've also spotted a few ballerina type exercises being used throughout yoga classes and some gyms are also running "Ballet workouts".


A ballet workout can build terrific posture and body awareness, and can also be a lot of fun. Obviously these workouts should be accompanied with a healthy diet and not the eating habits that Natalie Portman's character has during the film.
The film has had a good reception and I'm liking the new ballerina trend in fashion, but for me I'll not be too much ballerina as 1. I'm clumsy 2. It's all a bit girly for me but I'll try and team some of the new ballerina style fashion with my jeans and rock chick boots! ;-)

I'm off to book tickets for the film!