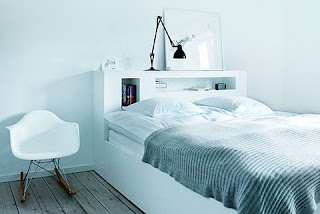 Image from HERE
Do you have a duvet stealer?
In our flat the duvet stealer comes in the middle of the night and takes the duvet away, it's then cold and can be a while before the duvet is returned. The duvet is never very far though but it's all wrapped up like a cocoon.
Soon enough the cocoon unravels but the duvet stealer has a tight grip on one corner of the duvet and you know it's going to happen again at some point. So you take the other corner and grip it as tight as you can. It's like a power struggle to keep the duvet away from the stealer and of course stay warm.
In the morning the duvet stealer gets told off. They know they've done wrong and they are not quite sure how it happens every night. A million (exaggeration) apologies later and it seems to be forgotten... until the next night.
I'm the duvet stealer! I seem to grab the corner of the duvet through the night and grip it and pull it round me that Spurs boy is left either trying to stay warm under the bit of duvet that's left or he'll simply pull the corner and it unravels and I normally nearly fall out of bed. At the moment though he can't do it that due to my knee.

Do you steal the duvet? Or know someone else that does?

Don't sympathise with Spurs boy too much as United play Spurs on Sunday at White Hart Lane - THIS IS WAR! :-)

I'm glad to see that you've taken WAR!!!! to an extreme level in the Boy-Bubbley household. Psychological warfare is a bit extreme though, you could have started off by just kicking him as he walked past and blaming it on Little Man or something?!

Yeah, but you have to build up to it ;) Why start with nuclear destruction when you can use some traditional methods instead? Save that in case we... *gasp* lose!