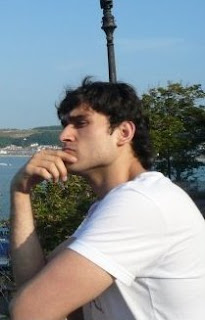 Today I spare you the ramblings of my world and head you into the inspiring words from another. I asked earlier this month if anyone fancied doing a blog swap and I'm pleased to say it will be a regular feature from now on.
This first blog comes from Goodbye Blighty written by Waqqar who was one of my first twitter followers and of course he's a Manchester United fan! The blog is one of my favourite daily reads and this entry explains why;
Why I travel...
So, it all started with my grandfather. He used to take me to school when I was a very young child as we used to live close to my grandparents. I used to spend a lot of time with him and I still am pretty close to him. I respect him and love him a lot. Anyway, going back a few steps... he used to work in the merchant navy. For over twenty years from the 40s and in to the early 60s he basically visited every port city in the world.

One of my earliest memories of him was a story he told me about an orange farmer in California. A few friends of his and him sneaked on to a farm and were picking some oranges when the farmer caught them. I think he must have been in his mid-twenties at the time. The farmer didn't admonish them, though. Instead he gave them a ladder and told them to take as many of the oranges as they wanted from the higher branches where the fruit was the sweetest.

Over the years he's told me so many stories about all these countries and places he's visited. He told me about his days in Australia, South Africa, Japan, and Brazil. He'd go to these countries for a few days a time and then they'd move on. He'd work on the ships and then they'd get a port break and experience this alien world for a few days. I think I've heard all his stories before and some of them more than once. His eyes still light up when he talks about those trips.

I was fascinated. I was enthralled. I remember, I used to sit on his lap when I was 5 or 6 and ask him about this place or that place. His stories were the catalyst of many flights of fancy and day dreams for me.

He formed the foundation of my desire to travel.

I was never really in to geography. I didn't want to learn about places. I wanted to go to these places myself. Experience them with my own senses. See them with my eyes, taste the foods, touch the buildings, hear the foreign tongues, and... yeah, not smell some of the places so much.

There were times in my youth when that desire was almost ironed out of me. I was going to get a desk job somewhere, doing something boring, and do it for who knows how many years. There was always that thought in the back of my mind, though. It was never fully eradicated. It did take some time for it to resurface though.

Through a mixture of circumstance, fate, and an ability to grasp a chance when I see it... I find myself in Saudi Arabia. I'm working in a university in Riyadh and am staring to branch out across the Middle East. I've already visited the holy Islamic city of Mecca and am going to Medina next weekend. I'm making plans to visit Egypt, Lebanon, Syria, and Dubai within the next 5 months and then wider across the Middle East after September. At this next phase of my life I think I'll be here - or a different Middle Eastern country - for the next 18ish months, bringing my total time to 2 years.

After finishing in the Middle East I have so many potential avenues to take but, right now, I think I'll go home for a few months and then go to Brazil for a while. I have no idea how long I want to spend in Rio De Janeiro but it could be as long as two years, until after the 2014 World Cup.

Travelling isn't amazing all the time so I'm not going to paint it as the most romantic thing in the world. I'm teaching English as a foreign language to pay for my travels and it's just like working a 9-5 job at home. Sure, there are weekends and evenings where I venture out and experience something new and exciting or visit a new place but I have to work. All I know is that I'd rather be working here and thinking of going elsewhere than staying in Blighty right now.
Thanks again to Goodbye Blighty for the swap, and here's the blog I did for Waqqar's site.


If you are interested in blog swapping then let me know, more details here

It was so great to write for your blog, Sarah :)