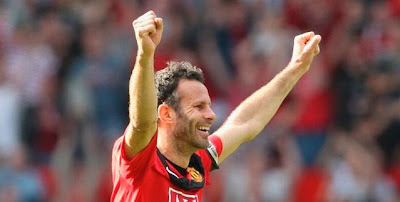 Ryan Giggs is 36 today and yesterday he scored his 100th Premier League goal for Manchester United! He is showing no signs of slowing down or stopping and he is just an absolute legend both on and off the pitch.

He has said 'when' he hangs up his football boots he would like to do more work for UNICEF, he is already an ambassador for them (see the video below) from last month's news.

I'm sure it won't be too long before it's Sir Ryan Giggs ;-)

P.S. Well done to Rooney on a fab month - he's become a Dad, captained Manchester United and England, and also bagged a hatrick of goals against Portsmouth! What a month!