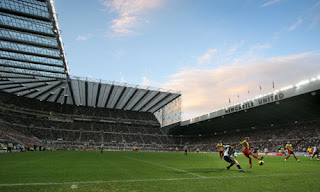 Yes you read that right Newcastle United have decided to call their stadium -  sportsdirect.com @ St James’ Park with immediate effect.

Managing director Derek Llambias said the famous ground would bear the name of owner Mike Ashley’s Company until the end of the season, when naming rights would be sold on the open market. Ashley angered supporters of Newcastle United late last month when he announced the club’s plans to rename the stadium for commercial purposes, having taken them off the market.

Llambias said of the re-naming announcement;

"We could have worded it better, and that's why we came out yesterday to explain what we're trying to achieve. With the renaming it was always going to be whatever brand it was, at St James' Park. For the remainder of this season, we already have sportsdirect.com on the Gallowgate so we'd like to take that branding through the rest of the stadium"


I can’t speak for the Newcastle fans but obviously the announcement of the renaming was met with hostility and I only can think how ludicrous it would be for Old Trafford to be renamed. There is clearly no thought for the fans and the history of the ground. As a football fan Ashley needs to go and let Newcastle move on with a new owner.

I also thought Sports Direct is a bit chavvy or is that just me?