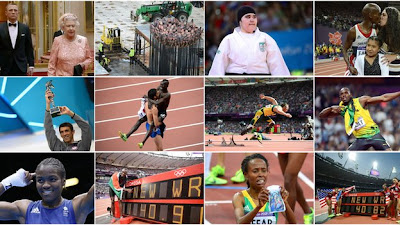 I'm in major withdrawal from the Olympics being over, I knew I would watch it but I didn't realise how it would consume me for the whole two weeks. It really did inspire a nation and I've noticed people are looking at their own goals and not just in sport. People have seen dreams made before their eyes. Just with effort and determination you can succeed.

From the fabulous opening ceremony I've been hooked both on TV and going into London whenever I can. I was lucky to have tickets before the Games started and was lucky again to pick more up through the two weeks. I've cried, shouted and even jumped up and down at Team GB's success. I've also done the same for the other great athletes of London 2012, especially Usain Bolt. Seriously we knew he was fast, but whoosh!

I have found the two weeks to be a great advert for what we can do as a nation both in making these Games happen but also what we can do for the future. London 2012's legacy isn't in the stadiums involved (which are fantastic) but in the people. We need to get behind Team GB today, tomorrow and always.

Can't wait for the Paralympics Games which have already outsold previous Paralympic Games. So proud of what every single one of us have achieved! Give yourself a pat on the back :-)