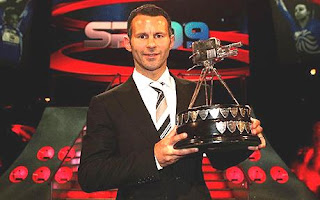 Ryan Giggs won the 2009 Sports Personality of the Year award and whilst he deserves the honour there were a lot of people who were unhappy at the decision as fellow World Champions Jenson Button and Jessica Ennis came 2nd and 3rd respectively. I know as a Manchester United fan that Ryan Giggs is someone who is treasured by the Old Trafford faithful and I am a big fan of his and believe whenever he does decide to retire the game will miss one of its greatest ambassadors.

I voted for Jenson and Giggs (admittedly more times for the latter) but I still felt that Jenson would win.

At the age of 36, Giggs is now starting to get the accolades that have in previous years alluded him, earlier this year he won the PFA (Players Football Association) Players' Player of the Year and he has won two European Cups, 11 league titles, four FA Cups and three League Cups and is still capable of changing the game when he starts tearing into the opposition's defence - yet this was his first Sports Personality Award.

It's a shame Giggs will never reach World Champion status (although for me he has been World Champion 11 times now - lol) and maybe if he had selected to play for England it could have happened?

Some people say that Jenson had just got into the car at the right time with Brawn and will find next season his hardest yet with his move to McLaren and will team up with fellow brit Lewis Hamilton.

But for now Giggs has won the award and if you don't like it, ya just gonna have to lump it!