Sarah Hates... it when people don't change the channel 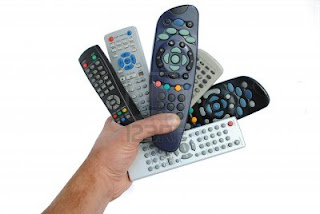 I realise that we can not all like every single sport, band, film... as the next person but I do know that every single day we have the choice to not sit through something we don't like. Many times I have seen people incessantly moan about a band, TV programme, sport but they continue to sit there watching it.

WHAT'S WRONG WITH YOU PEOPLE!?!

Is this another of those 'I'm cool because I don't like this band' thing well you look like an idiot.

1. Yes I realise there are other exciting things to watch on other channels and yes I might have decided to watch something you don't like but guess what with Sky+, red buttons, iPlayers I can watch everything I want to but obviously not all at once. It's a technological wonder!

2. Dear BBC, If I sit to watch Djokovic playing Berdych then I want to watch that match in full, I don't want to go from BBC1 to BBC2, back to BBC1 and then the red button. I want to be able to sit and watch the match in one place. Could we have a Wimbledon channel please? So annoying.

I feel so much better for ranting, thanks for listening :-)