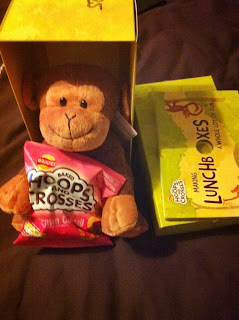 There's been a little monkey living with me for a while now, his name is Walker. I was sent him and a packet of Walkers Crisps new crisp sensation 'Hoops and Crosses' and I've since been buying them every two or so weeks. It would be more but a girl can't eat too many crisps can she? Ok, that's a total lie but shhh...

Before I could take a picture of the Roast Beef flavour that I was sent, they had been eaten! Yep, all gone. I have since bought the prawn cocktail flavour ones which I wasn't overly keen on admittedly, the roast beef ones are very yummy. I haven't tried the salt and vinegar ones as I'll admit this is not my favourite flavour. I'd love to see these in a cheese flavour or pickled onion *drools* 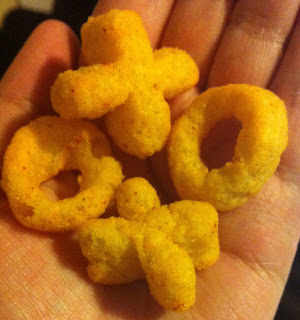 Anyway the important thing with these is that they are wholegrain, there's no artificial flavours or preservatives and they contain 30% less fat than a regular packet of crisps! They have become my new work lunch snack but they would be perfect for kid's lunch boxes too.

P.S. I named the monkey Walker because... I wanted to!

Disclaimer - I was sent the crisps (and Walker) for an honest review, which I always do for my blog reviews.