Stop googling and use your brain 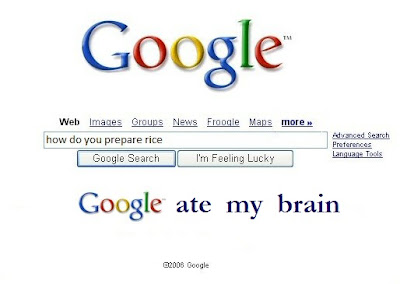 I listen to Frank Skinner's Absolute Radio podcasts every week and the latest one he was talking about how he uses Google. For me I use google, wikipedia and IMDB on a daily occasion, some days it could be quite a few times. Now what Frank was saying in his podcast was that he uses Google only for things he really does not know and could never know and uses the example of "What's Paul McCartney's mother called?" He has no idea, so he looked it up. But if there was something he really should know he won't look it up, he will have to think about it. This seemed pretty normal to me and then I started thinking about my Google searches.


I definitely fall into the "if I can't recall it within a minute I google it". Is that bad? I personally don't think it's healthy as I rarely (ahem!) test my brain as it is. I have to use google to find information for the writing I do which is fairly normal but using it to find out a random footballer is something that yes might annoy me for a few days but the pure joy of remembering their name whilst eating dinner on a random Wednesday is so much more fulfilling. I used my brain! Yay!

Now I have a page in my notebook which is used for helping me to remember stuff. I also have started asking people instead of looking up on Google; I know everyone's strengths as I often imagine my ideal quiz team, so I can tailor my searches to the right people. Sometimes I might ask them something that they might not be able to recall either but it's even better to work things things out with someone else. Especially if there is hot chocolate and a box of maltesers involved.

So yes wonderful Google, you are indeed wonderful but Sarah has got to start using her brain a bit more. You can just teach me the stuff that I really don't know :-)

Oh and if you didn't know Paul McCartney's mother is called Mary. The Beatles song Let It Be was based around a dream he had after she died and she is named in the song. You see you've learnt something today :-)