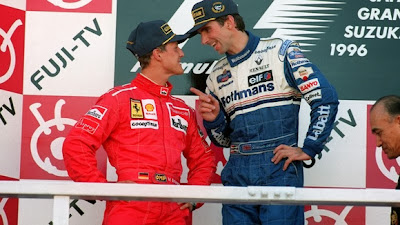 I'd also enjoyed the Mika Hakkinen years in the late 90's before Schumacher went on his major winning run through the early 2000's. From 2005 until Vettel's turn for a winning run in 2010 there were four winners; two titles for Alonso, one for Raikkonen, Hamilton and Button.  For some reason I only have very vague memories from when Raikkonen won but I can remember when Button won like it was yesterday.

This season has been dull, sorry but it has. The fact that the only F1 highlight I have for the sport this year came from the Ron Howard film 'Rush' about the rivalry between Lauda and Hunt says it all.

F1 has become all about managing tyres rather than pure adrenaline racing. Next year sees the sport take on a whole load of rules changes that have baffled my brain. One of which being the fuel limit of 100kg per race, at the moment most cars use 160kg. Yes, energy efficient cars is all very well and good but they are already managing their tyres, so we could still see races end with cars coasting home. That's just not racing to me.


There has also been a lot of anti-Vettel behaviour over the recent years and more so in this season. I remember this happened with Schumacher but these days with social media everything is so instant. All it takes is for Vettel to win and for him to his No1 sign and just watch as the comments roar into social networks. I often wonder what Twitter would have thought about when Schumacher had crashed into Hill in the Australian Grand Prix in 1994? Schumacher is also not one of the most liked F1 drivers of the past, mainly because when he dominated the sport it became boring and predictable. Vettel is likely to continue in that vein I feel as pretty much like when Schumacher dominated the sport, you find one pro Vettel fan and one anti Vettel fan. It is pretty equal, even though it might not feel like it at the time. I hope the F1 bosses take on board that the booing wasn't just aimed at Vettel but on them too. Right now is not a good time to encourage new fans to get interested in the sport.

I am not the biggest Vettel fan and yes I have myself moaned a bit about how dominant he has been but I would never, ever boo him. My favourite F1 races involve rivalries, wheel-to-wheel racing and the added intrigue of a longer than usual pit stop (remember those, they are rare these days). Each F1 fan is different with what type of racing they prefer and I realise that I might have to stop being so stubborn about what I have previously enjoyed in F1. I hope that despite the brain baffling rule changes and also some team changes that the sport gets at least some of the aspects of it that I used to love back.