I am playing this down as it's not so much of a problem than a full blown phobia. I do not like sharks, they give me a very irrational fear that if I was to ever see one up close without glass between us I would probably faint. Or worse, be eaten. I don't know when this all started but I could blame the Jaws films or the theme tune from the films.

I cannot watch the films, although I have done but I find hiding under a blanket with my book is far more enjoyable. You know, when you want to say "Yes I watched it with you" with 'watched' being used in a very loose term... I avoid the shark displays at Aquarium's and I have been known to walk quickly but quietly over the bridges above their displays in certain Sea Life Centres and shouted back that I will meet everyone else in the next display area. I prefer little Nemo's and Dory's.

If you hum the Jaws theme at me I will be likely to give you the mean eyes or friendly punch you in the stomach until you stop. I have also had countless nightmares about being eaten by a shark, I still get them now. Horrible! The most stupid thing really is that the chance of me being eaten by a shark are incredibly slim. I don't live by the sea and when I do go into the sea I don't go in shark infested waters so this fear isn't to me as bad as those who are afraid of heights for example. Some people have to encounter their fears every day and mine is one that comes back every now and then...

Like when I'm playing Grand Theft Auto V, you know normal stuff and I'd stolen a plane (as you do). Whilst flying around I had damaged the plane, oops! So I crashed into the water, it was quite a spectacularly safe landing in my opinion and getting out of the plane and into the sea, I didn't think it was so bad. I started swimming and then I noticed a pool of blood was starting around me and my legs were being tugged at from behind. Before I knew what really was going on... I was eaten by a shark!

Now, this was just a game but my word it heightened my fears and I realise how stupid that sounds as I am typing this. At least I will be more careful in the future... Stupid sharks. Although I do quite like Bruce in Finding Nemo and Shark Tale is ok. 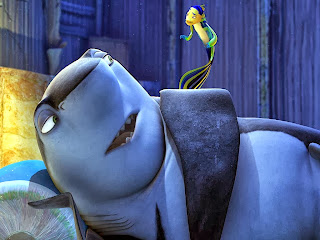 And don't even get me started on spiders!