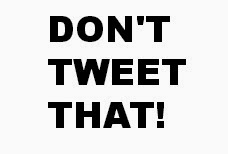 Over my 4 and a half year stint on Twitter I have seen many things (some I definitely did not want or need to see) and others that were downright barmy. I have selected five things that I see on twitter that make me shake my head. Although I probably need to get out more ;-)

No one needs to read about your toilet behaviours. We all 'go' but you don't need to tell us when. Thanks!

Putting your location on and going on holiday

I have to say I'm not sure why people want to let the internet know where they are all the time. The location info on some tweets is a little too accurate for me and with my iPhone a wrong press and I have the details of how to get to your house. Yes, really! It makes me panic as I don't want this information but some are so ready to give it out. Also beware when you leave your location on and then say you're off on holiday and write the dates. You probably wouldn't think people would be so silly but it happens.

The internet is full of moaning people isn't it? Life is so rubbish and awful that I must tell everyone. Guess what? You can change that by putting your phone down and getting outside. The answer isn't on twitter I'm afraid.

I also realise that I am moaning a bit whilst writing this. I get it. Oh the irony!

I have X amount of followers

Oh goody! I can read (if I want to) how many followers you have. Always wondered if there is a prize for the most followers? No? Oh well then... why bother ;-)

Retweeting and putting your reply at the end

I don't know why this has become the 'new thing' but I use this option sparingly, mainly to put an opinion on a blog tweet or agree with something someone has said. Others use it to constantly fill their feed with pointless conversations that I can't follow in that alone tweet.

So those are my five major gripes with people who use Twitter. Maybe I just do it all wrong... surely not ;-)

Note: I left off those who choose to tweet abuse to people as I thought that was a pretty obvious stupid thing to do!

What annoys you about Tweeters the most?