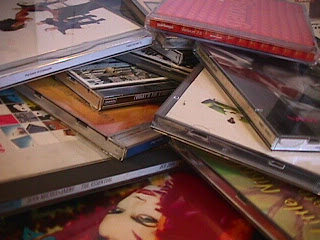 We started selling books, not just music autobiographies or guitar music but we got about 300 copies of the Harry Potter books about a month after they were released normally. When I left there was still at least half of this amount left. The focus was being pushed towards online and we were taking orders in the store for people to have their music delivered at home. We were showing customers that they didn't need to come into the store any more. Countless times we were telling the powers that be that it would be good to have a docking service where people could come into the store listen to snippets of a track and download it all in store. That never happened.

Do you know what is even more silly?

I still didn't get out.

I kept my job, one of the managers was so excited to be told that he could leave that we could have sent him off straight away he'd have been that happy. He'd had the big kick up the wotsit and I was still here.

My job became very fake, I'd gone from one failing department into one that flourished without effort - Games and Digital Media. We'd barely keep anything in stock long enough but a morning's sales would accumulate to at least 4/5 of the store's profit on the day. Naturally I wanted more stock, more XBox 360's, more iPods. We'd get on average eight a week of each console/iPad and watch as they filtered into Game next door. Then we missed out on some big new releases and I'd lean on the glass and watch as the queue started for Game to open. I'd look on the stocklist and see we had 0 on order! Things were getting worse, I felt awful because my department was getting praise for our sales but we weren't doing anything - we were just lucky!

I covered the Games desk for four hours one afternoon and served two people. I spent the rest of the time dusting shelves... DUSTING?!?! I don't 'do' dusting!

I had to get out and I'd got my kick up the wotsit! I wrote my resignation at lunch and handed it in at the end of the day. Now I needed a cry and a cigarette. Oh, and a Burger King Chicken Royale with Cheese.

The next four weeks passed in a blur as I had to find a replacement for my job. It wasn't difficult but it still hurt. I felt like I was giving up, giving up on my dream. The store struggled on for a few months and then it became Zavvi, before finally closing. I was there for the final day. There were no tears. It could have been so different, it just seemed that the powers that be weren't interested in our ideas. The company needed to adapt, they didn't.

I don't regret taking either job and it sure did eventually get me out of retail. But for those work hours I felt like one of the cool people. We were creating music memories for other people. Like me years ago hearing a song for the first time and asking who it was. You don't forget those things. I've always felt a tinge of sadness about going into music stores and seeing what they have now become.

The fact is had I been able to download my music in the store I probably would have used that service and I know many people have written about that too. Times change and sadly they didn't move on. But I still think it was the best job in the world. The one job that broke my heart several times over but took me ages to get over. I will never forget it though and I am so grateful that I finally got to live out my dream.

I see HMV have been saved