How did I end up in St Petersburg? 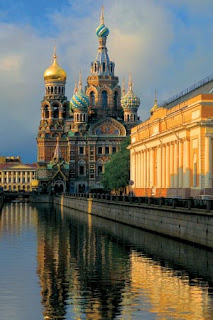 At first I had no clue at all to where I was and people on the street were pushing past me as I carried on walking. I wasn't sure of where I was walking to and then started walking up a few steps and then noticed I was walking towards a big building. A museum of somekind. As I pushed open the doors the museum was full of people and it was a struggle to get through to the back of the room.
As I got to the back it was clear I wasn't on my own and there was a man with me, I say 'with' because this was the first time I had noticed that he was even close to me when I was walking. Now the man was handing me a complimentary drink from one of those trays the waiters were carrying and he then walked off to look at a painting. I just stood and watched him move away from where we had been standing and I looked around the room and noticed it wasn't as busy as before. Just as I had spanned the room the man grabbed my arm and said "We have to go" and I quickly ran with him out of the museum. As we started running I then became aware that I was wearing a red cocktail dress with high heels, not the perfect outfit for a quick getaway.
As we were running I then realised we were being chased by three maybe four security guards and they were shouting at us but I couldn't quite hear what they were saying. As we carried on running it was clear the man knew where we were going and I simply was holding onto his hand for dear life as I had no idea what those men wanted. Somehow my shoes were coping with the cobbled streets as we seemed to pick up speed as we got to the river. There was a boat waiting with men aboard shouting at us to hurry up, they started up the engine and it started to move closer along the bank towards us. I could still hear the men behind us shouting and the boat was now very close and we jumped aboard. As the boat drew away from the bank I could see a sign in the distance that said "Welcome to St Petersburg". And then....
I woke up!
Yes it had all been a dream, a rather odd dream as I have never been to St Petersburg or even know really what it looks like. I found the above picture whilst googling. The man in the dream was Bradley Cooper... *swoons* and he was there as I'd had a twitter conversation about how HOT he is hours earlier. 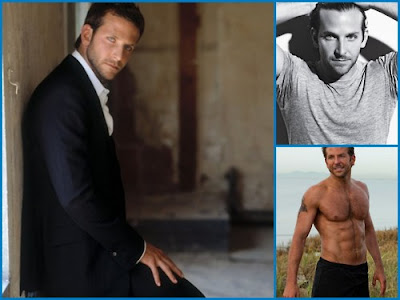 Consulting my Dream Dictionary the other bits I get are;
Crowds - Increasing happiness and/or widening opportunity for betterment.
Museum - Unanticipated good luck through a social contact is likely to follow soon
Run - You are involved in a situation from which you would like to escape.
Red - Bright Red is a warning to curb your temper, deep Red forecasts unexpected good news.
Boat - Is a symbol of your life depending on the details, like speed
Taken from The Dreamer's Dictionary: Understand the Deeper Meanings of Your Dreams

Oh and yes after many attempts I couldn't get back into this dream, I wanted to know where we were going next, why were we running etc
There was a time I thought I'd lost my dreams! Now they are back
Do you ever look into what your dreams mean?