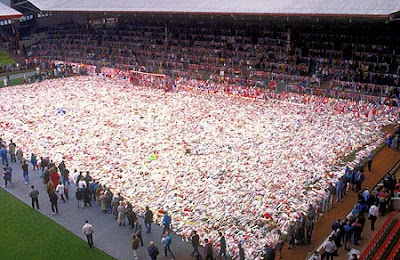 I was eight years old when the Hillsborough tragedy happened. I remember seeing it on the news and being confused over how something could have happened to football fans. Over the years we have all watched the families of those 96 Liverpool fans fight for the truth. Finally they got the truth last week, 23 years later.

Before the truth was announced I decided to have a look on twitter and I saw a lot of tributes and messages of respect but I also saw the horrid, vile and abusive messages that have come to take hold when Liverpool and Manchester United are opposed. This day wasn't about being opposed in our rivalry, this was about families finding out about their children, their mothers, fathers, this was about family. It was about showing sympathy to someone going through pain that we cannot even imagine.

Twitter became a playground of "They chant about Munich so we'll chant about Heysel", are you TWELVE? Didn't anyone ever tell you that you shouldn't answer back! More importantly where is your brain? I have had taunts from many opposition fans over the years but I prefer the chants of "19 titles where are yours?". I can't even bring myself to join in those horrid chants, I will never do it. It's not big or clever. There is no party that is better either as both sides are as vile as each other.

I follow a lot of United fans and it was interesting and disappointing to see how many turned into keyboard thuggery within seconds. Regular people I spoke to became thugs and I unfollowed, I have no time for it and without trying to be on some moral high ground I don't need to read it. I did see some Liverpool fans tweets and some were the same vile abuse but others like me were condemning the abuse they had also seen amongst their fellow fans.

On a day that was about 96 lives that never should have been taken, we were given another insight into the horrible abuse that still exists between the two clubs. They meet again this weekend and I hope the match and after it are all about the football. It's not looking too promising at this moment sadly.

To the families of the 96, we will never forget.

To those involved in the cover-up, we will never forget.