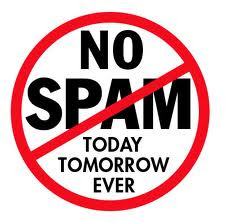 Oh how I wish that the above picture was true...

In the past month I've had my share of spam across a multitude of social network tools that I am definitely feeling spammed out. This isn't a new feeling but I have felt a bit in recent weeks that any account I have is more susceptible to getting spammed. It's wise to be aware of spam and the concept of "hacking" as we know it all happens, I felt annoyed by each one and mostly annoyed at myself to the point where I nearly cancelled all of my accounts. The drama!

Melodramatic maybe but I hate it. First my email got hacked, I have a separate account for my social networks. This keeps my accounts running better if I separate work, personal, social networks, blogs etc. I stupidly clicked on an email from Facebook, except it wasn't. S£%$. Friends alerted me to the spam coming from my email account, I apologised(felt embarrassed)and changed my passwords and reported it to facebook. Urgh. Remember: to check the send from address when receiving emails. The ones I've had come from an address with notification at the start and then a mismatch of numbers and letters.

Then twitter went on this mad sexbot spam, I was getting about 14 follows a day from ladies who weren't shy. Their profiles were quite obvious with want they wanted "I WANT SEX" was the most common. Don't we all? But this got insane. I guess they didn't do any harm with their follows but more I was just annoyed of the cheapness of it. Like I joked, we all want sex and here were these accounts being so open about sex. Which isn't necessarily a bad thing but if you click on one of the links that goes to either a dating or sex site you'd be horrified. The girls are young, not 16 years old and these accounts are allowed to be put on twitter. How? Remember: Block and report the accounts.

Another aside on the twitter spam are the ones recently that I've had where it's been "FOLLOW OR ELSE" and a list of accounts I'm TOLD to follow. Funnily enough the aggressive style doesn't work on me... BLOCKED

Then my tumblr started spouting about some iPad competition. The posts looked EXACTLY like the Tumblr staff blog so lots of people assumed this was tumblr adding advertising to their site. It wasn't. I got 6 posts in a day. Tumblr isn't a site I check into everyday as I schedule posts (although it's currently on hiatus) but again my friends pointed it out. Ack. Remember: Check into tumblr more often and read about any new spam issues.

I've fallen out of love with ebay and don't use it any more to sell stuff but I do use it to buy stuff and I got a steady stream of messages from one seller who I hadn't bought from telling me about his items, his website, his offers. I got about 4 messages before I'd checked my ebay email. He was selling hiking boots. I don't hike. Please go away. Remember: Check ebay more regularly and remember to report the account for spam.

This is probably a major melodramatic post but spam annoys me. It's my accounts. Go away. My stuff. Don't get in. Leave it. Private. MINE! (said in the voice of the seagulls from Finding Nemo)

The other gripe I have is how some of these sites make reporting spam SUCH a chore; twitter, tumblr and email were fairly easy. Reporting a spam email on facebook was filling in a form! Had I been able to forward the email to them they would have seen how much the email despite the address, looked like one of theirs. Typing it in wasn't enough! The same with eBay I had to fill in a form, rather than alert them to the message in my account. Can see why people don't report spam!

I haven't in a while had any paypal spam... cursed myself there haven't I? But if you get any just forward them to spoof@paypal.com and delete them. I've added the address to my iPhone so when I get any it's a quick forward and done.

Be alert with spam, I'm normally really good so the facebook/email one REALLY annoyed me. We all have our information and passwords but these need protecting and sometimes we can't rely on the accounts to protect us. Also make sure any virus programmes are up to date on your computer, so far I've never been that unlucky... cursed again? Shhh Sarah. Shhh.

Be good. Be clever. Be wise.